Get fresh music recommendations delivered to your inbox every Friday.
We've updated our Terms of Use. You can review the changes here.

The Polyphony Epiphany: 1107 modulations from C to A minor 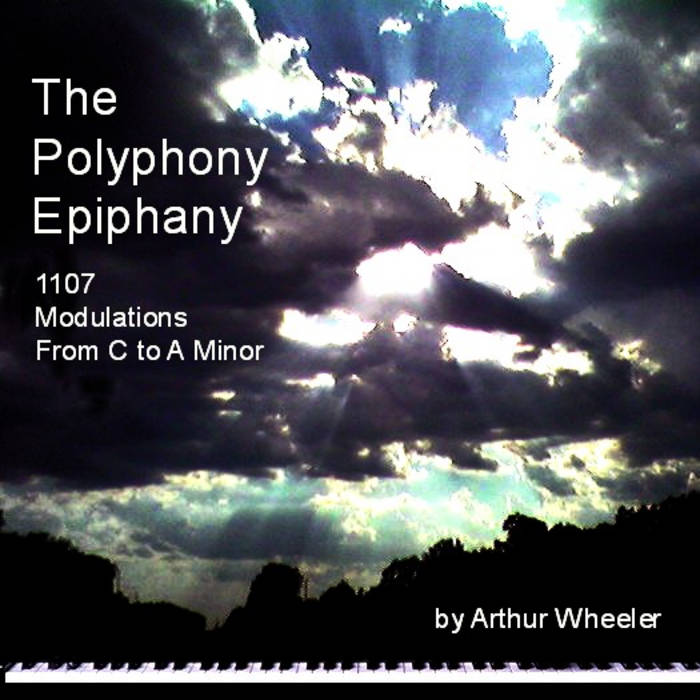 WARNING: THIS IS FOR PLAYERS ONLY! IF YOU DON'T PLAY AN INSTRUMENT OR SING LIKE YOUR HAIR IS ON FIRE, THIS ALBUM IS STRICTLY OFF LIMITS FOR YOU... UNLESS YOU REALLY, REALLY, REALLY WANT TO LEARN... IN WHICH CASE, PLEASE UNDERSTAND THAT WHEN YOU PRESS THE PLAY BUTTON, YOU CERTIFY YOUR INTENTION TO GET BUSY WITH MUSIC RIGHT NOW. WE'RE NOT KIDDING.

Qualified listeners (see above) are encouraged to think of Hoagy Carmichael’s “Georgia”. This iconic American song, familiar to everyone, contains some of the most common chordal movements, in particular 1 - 6 or 5 – 1. These popular chordal movements appear in almost every popular American song and indeed in most classical music. What the performer wants (master or beginner), is a colorful way to perform the commonplace.

The CDs, like the online samples, were recorded as if played as a performance, with little or no silence between the individual modulations. We hope the listener will enjoy the effect.

The Polyphony Epiphany began not as a grand vision for a major work but as solace for a troubled artist. In a time when life seemed to be going against him, Art turned to the keyboard for strength. He started simply by writing down the standard jazz transitions he knew by heart. These are probably familiar to most jazz enthusiasts, aka "jazz clichés". Over time, as the work progressed, a transformation took place, for the artist as well as the work. As he began to exhaust the familiar clichés, he was already considering the idea of infinite possibilities, and he widened his scope. The first 250 or so have many similarities and a may give the impression that the whole work is not as widely varied as it actually is. The listener is encouraged to persist and experience the transformation as it unfolded for the composer.

The last entry in The Polyphony Epiphany is # 1107. The composer chose to stop writing after # 1107 in part because the number itself does not suggest finality; his ultimate intention was to instill in the listener an idea of virtually infinite possibilities, and that the study of all these variations should serve more as an introduction than a summation. Still, # 1107 does serve as a conclusion for the work, and the composer even gave it a name: “Done in Thirty-one”. An explanation follows:

Any of these chords, superimposed over the dominant 7th in a 5 – 1 progression, can produce instant extensions or alterations sounding like anyone from Bach to Bill Evans (and beyond!).

Some of the modulations go beyond C to A minor: The whole book is basically just working with the first three chords of Georgia; C, E7, A minor, a progression that occurs in countless songs. Most of what you hear is a variation on the one measure of the E7 chord that segues to A minor. There are however, a number of variations in The Polyphony Epiphany that extend the progression a measure or two beyond A minor, all of which are fully notated.

On the CDs, the 1107 modulations are grouped 10 per track. So, for example, track 1 of CD#1 contains modulations 1 through 10; track 2 contains 11 through 20; etc. This was necessary because the CD format permits no more than 99 tracks on a CD – it’s a technical limitation of the recording standards; we grouped them to limit the number of tracks per CD.

So, in order to search for a particular modulation, find it within its “group” track. Many CD players will display a user-friendly track title, such as “0031 - 0040”. If your CD player only displays track number, such as "13", you may refer to the liner notes for the track number containing to the piece you want to hear.

Bandcamp Daily  your guide to the world of Bandcamp